Four days of presentations, workshops & chats have drawn to a close. I've had a great time, learned a lot, met interesting people and leave full of ideas and enthusiasm. Full videos of every session will be posted up on the site in due course but in the meantime, here are some of my highlights.

John gave the opening keynote broadly on the subject of sustainability. He believes that our society and economy are undergoing a fundamental shift in the way they measure their own success. An economy in which 'growth' is the primary metric of health is clearly not sustainable in a finite environment such as the planet Earth. 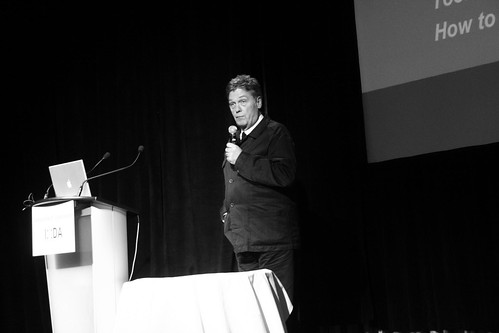 To support this idea, he listed a number of areas which he believes will soon 'peak'. Peak oil is familiar to most people: the production and consumption of oil cannot rise indefinitely hence at some point it will peak, after which production will shrink. Peak credit is also widely known though not usually under that name. He introduced the concepts of peak movement (the amount that people travel cannot continue to increase at the current rate), peak embergy (the amount of waste produced in the manufacture of goods and food is too great), peak water (our water consumption is too high) and a few other peaks which I forget.

The remainder of his talk can be summed up in one word: decentralise. Production of our food, energy, water and consumer products is, in his opinion, too distributed, which wastes energy in transportation and makes us more vulnerable to breakages in the supply chain.

I disagree with certain parts of John's thesis.

Although we have certainly seen a recent reduction in the availability of credit, I don't think it's obvious that this represents an all-time peak. Even less likely is that the path now is ever downwards. In my opinion, credit availability will rise again. I think it's easy to overplay the importance of the credit crisis. People in every age believe that theirs will be one of great change but as we know, plus ça change, plus c'est la même chose.

Similarly I don't see that movement, waste and water consumtion are likely to peak any time soon and moreover, if they do, it will almost certainly be due to peak oil.

As for the decentralisation argument, how will this make us more efficient? Surely the reason we centralised in the first place was for increased efficiency? Nevertheless is was an excellent talk which really got me thinking about my role in life and in the world.

Robert kicked off Saturday by suggesting ways in which to harness people's emotions to enable changes in their behaviour. He quoted from Dan Ariely's excellent book Predictably Irrational which I am currently reading. 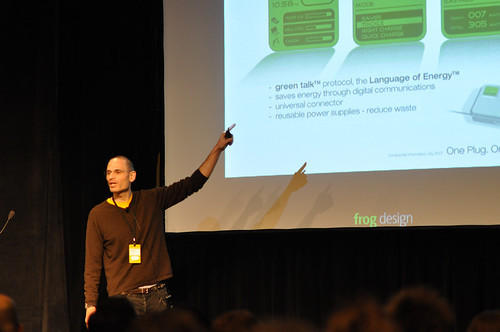 However, what really inspired me was the discussion of his involvement in frog design's recent project with AIDS clinics in South Africa. As he explained, one of the biggest problems is that most South Africans who are HIV+, are unaware of the fact. Men especially are reluctant to attend testing clinics because of the stigma attached to AIDS. Through extensive ethnographic research, Robert and his team were able to design a cheap home testing kit with clear usage instructions and messages from local rap stars reinforcing the message that "knowing your [HIV] status" is something to be proud of. Initial tests of the kit suggest that it will redically increase the number of people who can receive treatment for HIV/AIDS.

That's the kind of behaviour change that can really improve people's lives and benefit all of humanity.

The most amazing technological demo I saw this weekend appeared to be an afterthought, tacked onto the end of Bjorn's talk about rapid software/hardware prototyping methods. Fortunately, someone videod the best bit and posted it online almost immediately. Watch:

This is a video demo of a prototype interactive design table project currently codenamed "fourbysix". Not only is it a multitouch surface but it incorporates a high resolution camera which allows 'real' objects placed on it to be digitised. When a wireless keyboard is placed on the surface, it is recognised by the software and augmented with several virtual controls. This allows a perfect blend of traditional input methods and intuitive direct manipulation input.

This technology is not new. I've seen countless cute tech demos of multitouch projection displays, augmented reality and surface computing. But this is the first time I have ever seen it used in a way that is actually useful. Really useful. At the end of the presentation when Bjorn asked "Any questions?", the entire room responded with "Where can I get one?!"

Microsoft eat your heart out.

Another, more down-to-earth presentation came on the subject of waiting. We often have to wait for things. We wait for a file to save, we wait for a web page to download, we wait for the elevator, we wait for the customer service agent to answer our call. Waiting usually isn't much fun and can often lead to frustration ("Your call is important to us. Please hold."). The best experience would usually be achieved by removing the wait entirely but this isn't always possible.

But, as Joseph explained, it isn't the wait itself which is frustraiting, it is the perception of the wait. And perceptions can be manipulated. For example, research has shown that a wait of up to 90 seconds in a checkout queue is perceived as part of the buying activity. After 90 seconds, however, people start to perceive waiting as an activity in its own right and become frustrated.

I was remineded of the famous apocryphal story of the architect who was tasked with speeding up the elevators in an apartment block. Instead of modifying the lifts, he simply installed mirrors in the lobby. This gave people something to do while waiting and thereby reduced the perceived length of the wait.

What is Interaction Design?

Awareness of how design can impact the world is rising within the industry. Outside of the industry, however, most people remain ignorant to the very existence of interaction design. What better way, then, to raise the profile of the discipline than to undetake projects which deliver on our goal to improve the world.

When can you start?